Reinvent your form building experience with FormCan, the next generation form builder. 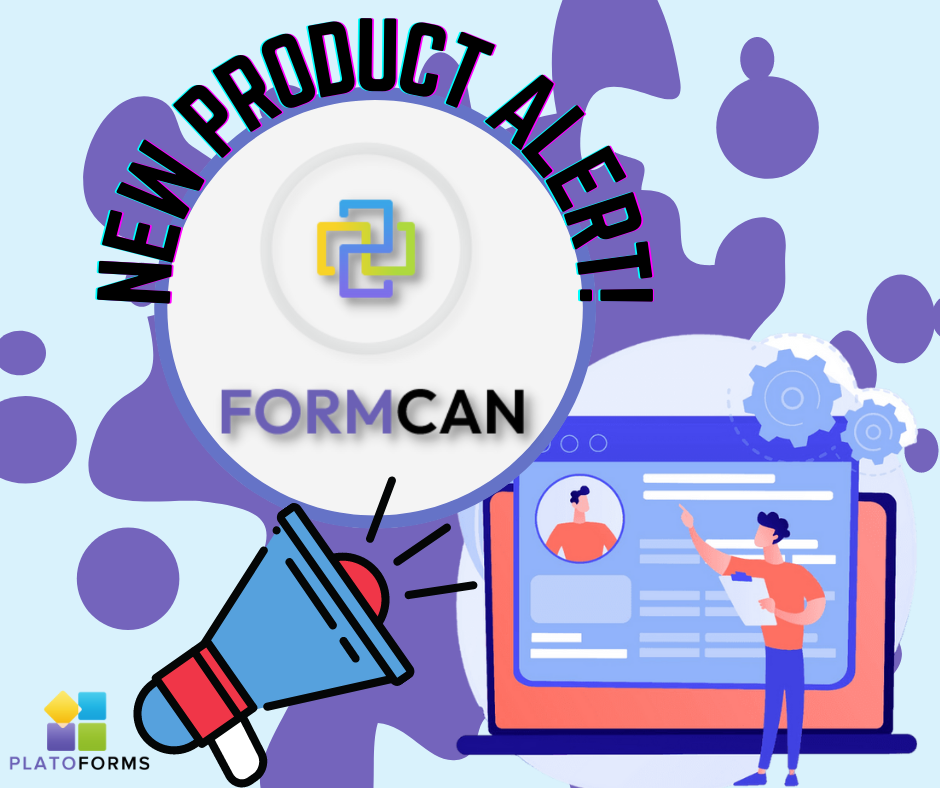 Modernization of form builders doesn’t only mean including new era themes and vibrant colors, it needs to embody innovation. We wanted to establish a form builder that would actually solve problems, not create them–that’s why when we say FormCan is your next-generation form builder—we’re delighted to say that we nailed it.

It wouldn’t be enough to simply call FormCan the next generation form builder, because it’s more than that. A whole new software that pushes the limits of web form creation, FormCan isn’t built to replace your usual form builder—it’s created to reinvent it. It isn’t an alternative; rather it redefines the orthodox of form building: Fresh, intuitive, and real-time. 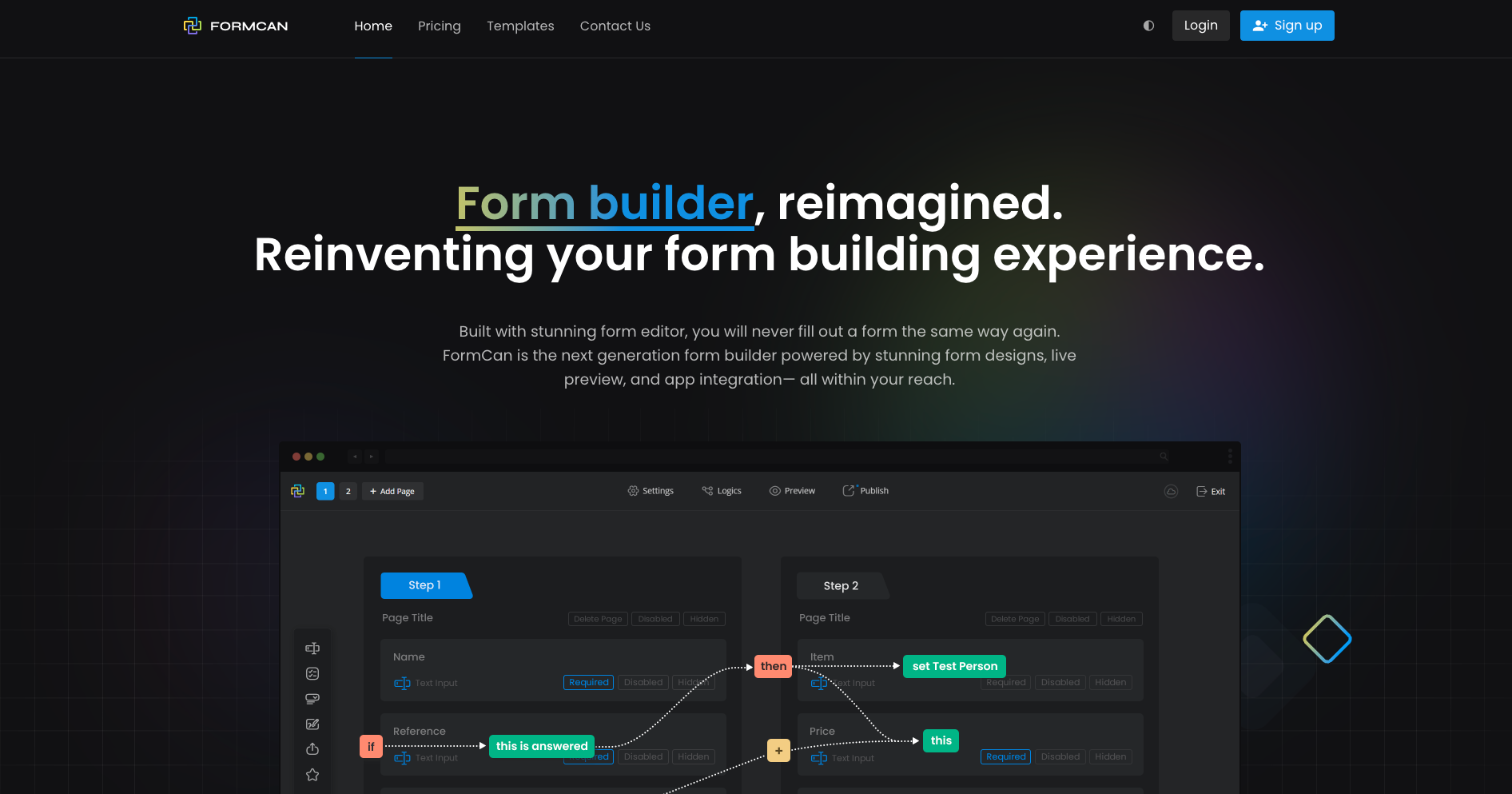 You asked, we listened

We have always known the role of PDF in every industry. It’s a staple in the digital world—specifically in business and data collection. With the mission to help companies organize electronic files and efficiently collect data that matters most to them, PlatoForms was started. Though PlatoForms provides a web form feature, it’s specifically designed for PDFs. Because our extensive experience in handling PlatoForms allowed us to lend ears to users who don’t only use PDF, but also web forms—this opened another door for us to scale through another product invention.

The old SaaS of today

Living in today’s high-tech breakthroughs and consistent releasing of new iPhones, this age’s form builders seem to be still not included in the boat of innovation. Back in the day, when form builders offered a WYSIWYG (what-you-see-is-what-you-get) model, it was almost true, until it isn’t. Now, the form tools in the market are still stuck on the old SaaS model, where software tools are programmed to be subscribed through a fixed pricing plan. Despite the promising slogans and colorful gifs, the form tools in the market aren’t very good.

The list of reasons why goes on—the capacity to allow form editing and previewing at the same time is still lacking—which limits the users’ ability to visualize forms in their finished output. Because you need to click ‘preview’ every time you make changes in your form (it doesn’t matter if it’s a single period or many alphabets), the back and forth of form creation today doesn’t only consume more time, it also promotes inefficiency.

Not to mention, building large forms in today’s form builders isn’t the easiest thing to do. If your form has multiple fields and pages, it’s easy to lose track of your place, considering the limits of browser performance and its slow interface.

There might be plenty of fish in the sea, but none of them reflects the beauty of the present’s technological upgrades.

Taking these limitations in mind, we had to reimagine the form-building system. Replacing the traditional form builders isn’t enough—it has to be comprehensively recreated. A reinvented form builder means a tool that doesn’t just wow you with its external appearance—it’s also a modern software that provides efficiency, automation, and is worth the penny.

FormCan takes your form creation to a whole new level. Our features aren’t built to impress; they’re created and derived from real problems. Below are the features that set us apart from the market:

Every form builder has a preview button, but let’s admit—it’s not ideal.

Editing, saving, editing, saving, previewing—we get it. It’s tedious. Imagine using a tool that allows you to change your form font or color instantly to see whether it suits your theme or not—without having to click save and go back to previewing it again manually…. What a dream. Except now, it isn’t—our live preview feature makes this a reality. Forget about the edit, save, edit, save, preview—just edit and preview your form. That’s it. Fast, instant, and productive.

Small or large forms, there is no exception here. FormCan lets you create any forms, especially large ones with multiple fields and pages. We know the struggle of using a browser and its ability to make your form building experience sluggish; that’s why we built a grid-style form builder that you can zoom in and out. Forget about your form size—you can overview it anytime.

We’re all been victims of the “You can have 1000 submissions on this plan” on pricing plans. Let’s be honest—no one can submit 1000 forms in 30 days. Unless you’re a massive world bank with thousands of employees and clients that uses forms every minute, it’s not ideal for you to pay those extra bucks for submissions you won’t ever use.

The fair solution? Pay-as-you-go. One, two, three, fifty submissions? You decide. The good thing? Pay for what you only need–save those extra cents.

Finally, a form builder that includes dark and light mode—this isn’t Twitter or Facebook, people. Another cherry on top: FormCan is packed with elegant themes and designs, leaving those 21st-century clunky forms of the past.

FormCan is your next-generation form builder brimming with modern and functional features for all types of industries. Create forms with stunning designs, edit in real-time with live preview, and integrate them with your fave apps–it’s now in your hands.

Sign up today and start building forms the FormCan way.

Hey, we’re on ProductHunt! Check this out.